As part of our initiative to put the spotlight on startups in Korea and beyond, the Startup Radar Team recently traveled to Israel where we were fortunate enough to meet some of the countries most innovative startups. The Spotlight on Israel series will focus on the most promising talent we met. As well as this, we want to share some of the lessons that we learned from these businesses for you to use in your startup strategy. Therefore, this episode of ‘From Seoul to Tel Aviv’, will feature some of the most innovative startups in Israel, the Tel Aviv blockchain ecosystem and Blockchain startups in Israel, and how to bridge the connections.

The team consists of fintech experts and cybersecurity professionals who have been in the blockchain scene since its inception. Team members include Yaniv Feldman, CEO of One Alpha, the blockchain research & analysis department of First Group. As Co-Founder of coininteligence.com and Geektime, Yaniv has been researching and writing about blockchain and crypto for over 9 years. While sharing their impressive knowledge about the Israeli blockchain scene, CEO Ran Goldi and his team gave us insights about the most prominent companies in Israel at the moment. While learning about the advanced blockchain ecosystem in Israel, we drew a lot of comparison to the blockchain development sphere in Korea.

Korea & Israel – Setting the Foundation for a Blockchain Ecosystem

Korean and Israeli startups are well-known for being leaders in the blockchain scene. Therefore, both nations are receiving notable attention and investments from major global companies. From weekly meetups to conferences and private events, Korea and Israel see the potential of blockchain technology and actively support its adoption in diverse industries.

Cybersecurity and cryptography play a key role in the Israeli defense establishment. Also, Fintech is one of the fastest growing Hi-sectors in Israel. Israel’s strong focus on these fields provided optimal prerequisites for the development of the blockchain ecosystem. Additionally, Ran Goldi explained, that a strong entrepreneurial mindset is taught from early on. Failing is considered as part of the learning process and Israelis don’t hesitate in adopting new potential technologies. That is why Israel’s largest bank was one of the first worldwide to partner with Microsoft and develop a blockchain-based platform for creating digital bank guarantees.

Korea has also been setting a great foundation for the adoption of blockchain technologies. This year, 31% of Korean smartphone users are expected to make payments using their phones. Korean citizens have been huge fans of cashless payments for some time. Furthermore, KakaoPay’s transaction volume reached 1.3 trillion KRW in March 2018, showing a 900% growth within one year. Stores that utilized the KakaoPay system increased from 2,500 to 12,600. Korea’s readiness for digital wallets and instant payments isn’t just significant for the digital currency, though. This attitude could also make Korea the first society to become completely cashless.

ORBS is an Israeli company that has actively participated in the Korea Blockchain Week. While joining numerous meetups, conferences, and events around Korea, the team saw Korea’s potential in becoming “the global leader in blockchain“. Co-Founder Uriel Peled shared his interest in entering the Korean market during our visit to the ORBS office in Tel Aviv.

ORBS’ technology works as a complement to the Ethereum network and aims to help developers create dApps more easily.

Using Orbs alongside Ethereum allows dApps to enjoy the best of both chains: unmatched security, liquidity and ecosystem integration, together with low-fees, production-ready scalability and a suitable fee structure.

Given Korea’s eager commitment to adopt blockchain, Orbs could provide the optimal solution for upcoming startups. The company is currently in talks with major Korean businesses for potential partnerships. Also, Peled shared his plans to open an office in Seoul by the end of this year.

We‘re looking forward to the innovative breakthroughs that the collaborations between Korea and Israel will bring! 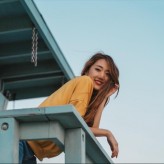 Sue is a Visual Content Creator and Social Media Manager at Startup Radar. She is a creative from Berlin and speaks 4 languages fluently. Message her in German, English, Korean or Vietnamese: sue@startupradar.asia

Skycoin Looking to Break into the Korean Market